New version of the spellchecker! 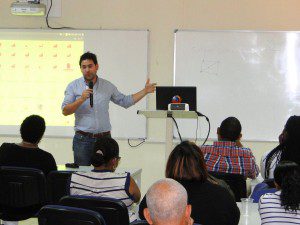 Manuel Ortega explains the workings of the spellchecker

Last Saturday, the new version of the open source spell checker for Papiamentu was launched. This happened during a well-attended conference in the ICUC the Brionplein.

The Foundation Curaçao Open, who released the spellchecker in 2011, has used funding from the UNESCO Participation Programme, to update the spellchecker and to make a promotional video that will be shown on TV in the coming weeks.

The importance of a spell checker that works on the Internet, is that it works while writing emails, and discussions on Facebook. The spellchecker works in the Internet browser ‘Firefox’, which is also free and open source.

Besides the release of the open source spellchecker, a ‘locale’ for open source programs was presented. This locale describes digital characteristics of a language. Did you ever notice that the date format on a Dutch version of your favorite spreadsheet program, is very different from an English / American version? Precisely, this is because both languages ​​have their own ‘locale’ that establishes this.

Papiamentu has a locale since Saturday, October 31st and the next few months it will be integrated as much open source software as possible.

A third innovation concerns the ‘banko di palabra’, a website for words. This site allows you to search for words that exist in the Golden Booklet, but also to add words. The new words can be voted on and the intention is that in this “open” way, through crowdsourcing, an official commission regularly will be adding new words to the spell checker.