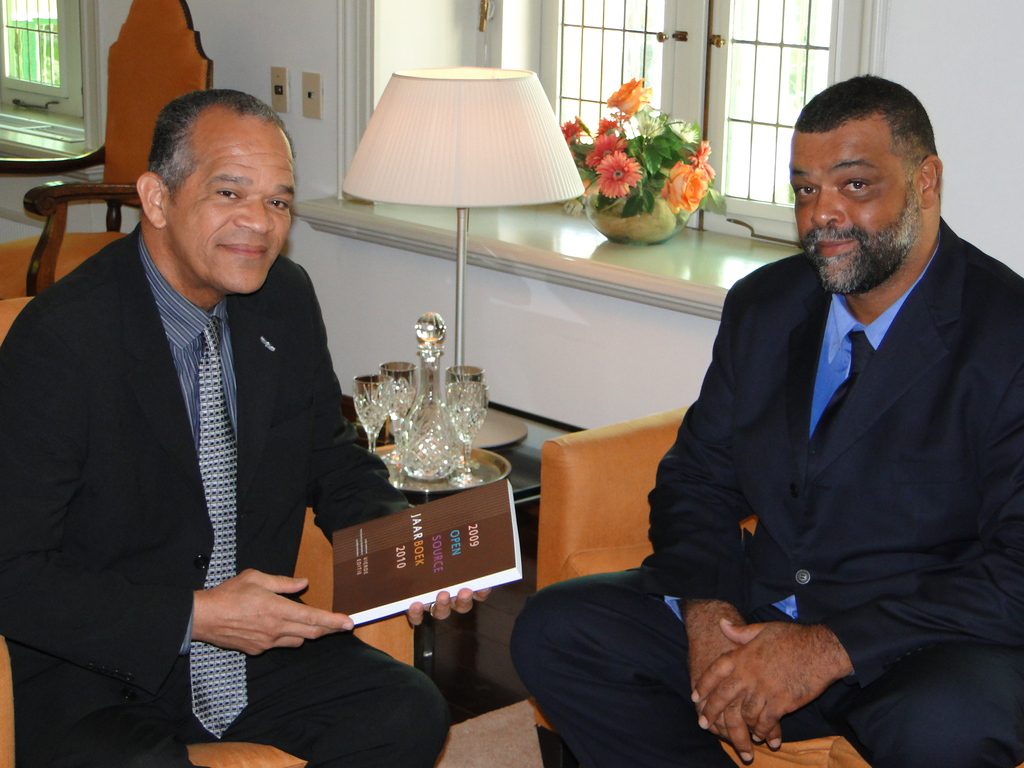 The chances for a successful migration to open source software and open standards within the government increase with clear political and administrative support. In the Netherlands, it has mainly been the Lower House of the States General that advocated the implementation of open standards and open source software, through the so-called ‘Vendrik motion‘ (2002). The State Secretary Heemskerk (Economic Affairs) and State Secretary Bijleveld (Interior and Kingdom Relations) have tried to realize the wishes of the Lower House through the action plan ‘The Netherlands in Open Connection’ (NOiV) and through accents in the ‘National Implementation Program e-Government’ (NUP), respectively. And within his portfolio, Minister Plasterk of Education, Culture and Science (OCW), was working on open educational resources in the ‘Wikiwijs‘ project . One of the challenges of the program bureau NOiV lies in tempting the politicians and senior civil servants of the public sector to carry out the wishes of the Lower House.

In the Netherlands Antilles, another part of the Kingdom of the Netherlands, endorsement came from a much higher level. The Minister of Telecommunication, Maurice Adriaens showed himself to be an advocate of free and open source software by his contribution to Software Freedom Day. In his Christmas Message 20091, H.E. Frits Goedgedrag, Governor of the Netherlands Antilles (and in this capacity representative of Queen Beatrix), referred to the development of open source software and open content as shining examples of selfless contributions to a better world:

“The reality is that selflessness does work! Recently it has been established that it is actually in our benefit if we cooperate and share, instead of only thinking about ourselves and refusing to help others. An example of this can be found in the computer world. Certain software developers do not keep their information a secret, they do not scrupulously protect their discoveries and insights, but they freely share their information and make their programs available at no cost whatsoever, in order for others to use it and even make improvements.

A press release of the University of Dartmouth confirms the strength of selflessness in regard to Wikipedia, the ‘open source’ encyclopedia in which the public makes contributions, without personal gain. This is yet another example that shows success is reached by not only being focused on survival.”

One Kingdom, but independent countries

The Kingdom of the Netherlands consists of three independent parts: the Netherlands, the Netherlands Antilles, and Aruba. On October 10, 2010, if all goes well, that is about to change. The islands of Curacao and Sint Maarten will then obtain the status of autonomous country within the Kingdom. Bonaire, Sint Eustatius and Saba (the BES islands) will enter into a new association with the Netherlands and will obtain a status comparable to that of a municipality. This will effect the scope of Dutch legislation towards the six islands.

Promotion of open source on Curacao

Ace Suares mainly works on Curacao. Since 2002, he has made an effort to stimulate the use of free and open source software. In his efforts, he has worked closely with Stimul-IT, an independent foundation established by the Curacao Department of Economic Affairs, that gives support to small and medium-sized enterprises (SMEs) and targets the development of Curacao as ‘Information Society’. In 2004, the first open source conference was held with speakers from the Netherlands and the United States. The then minister of Education, Omayra Leeflang, opened the conference. One of the speakers, Robin Miller, was surprised about the level of acceptance of free and open source software:

“I was warned that Linux and open source were not well-known here. This was not true, but most of Curacao’s Linux and open source software users thought they were alone. Indeed, it turns out that almost every major IT-related business here was already using Linux, and that most plan to use it more in the future.2“

In addition to regular lectures, new conferences took place in 2006 and 2008. “From 2004 to 2010 we have organized an average of three lectures a year on free and open source software,” according to Suares. “With those lectures we have reached the educational sector, ICT-professionals and managers.”

But hardly an organized community

Setting up a local user community or a more formal alliance of open ICT-companies has not been successful. Ace Suares: “We did try to get it off the ground, via meetings as well as via mailing lists and Google Groups, but it seems as if it does not fit into our culture.” Linux Users Netherlands Antilles (LUNA) did manage to organize a number of meetings on Curacao and Bonaire, but interest in it rapidly declined. In practice, Open Source Users Curacao seems to remain limited to a group on Facebook (with some 216 members).

Curacao does have a number of companies that offer services based on free and open source software. “My company, Suares & Co, is the only company that exclusively offers FOSS-services,” Suares says, “and there are five companies that offer it in addition to closed solutions.” Those companies are Artificial Intelligence Systems, Bi-Hive, Digital Communications Solutions BV, Envision and FIT-IT Solutions. The six companies offering open solutions have tried to set up a professional association, the Curacao Open Source Association, but it has not materialized.

Ace Suares can give several examples of real use of free and open source software on Curacao. Dutch Antillean Airlines (DAE) has been using open source software on its servers for five years already. The waste management company Selikor uses Linux as platform for its roster software. The program ASYCUDA3, short for Automated System for Customs Data, and developed by the trade organization of the United Nations (UNCTAD), is in use by the Customs of the Netherlands Antilles. Suares on this: “ASYCUDA is preferably used on servers with Red Hat and that is also the case in the Netherlands Antilles.” One of the bigger car dealers on Curacao, Caribbean Motors, has opted for OpenOffice.org, Thunderbird and Firefox. A full switch to open source software is not possible because of specific software in use for the car dealer sector. Stimul-IT is leader where the use of free and open source software is concerned. In the area of office automation, this organization has practically completely switched to open source and serves here as an example to the SMEs.

In 2009, the ‘Curacao Knowledge Platform’, commissioned by minister Adriaens, worked on a master plan for ICT on Curacao. The ‘Master plan Curacao Information Society4‘ has come about through various open work meetings on telecommunication, government, education, job market, and daily life. The plan forms the basis for a new policy. Open source takes a modest place in the master plan, but Stimul-IT, who holds the secretariat of the Center , intends to set this right in 2010.

The Christmas Message by H.E. Frits Goedgedrag, with its positive assessment on open source and open content should be considered a personal message and not an expression of government policy. However, it does show us that the essence of ‘open’ has already sunk in with Antillean administrators.

Stimulating an increased use of free and open source software and open standards is a matter of long term goals and perseverance. Stimul-IT plays a central role here. In addition to its own exemplary role and introducing open accents in the master plan, the organization assists in the implementation of OLPC-laptops in three schools. A seminar about Education and ICT, with special attention to the electronic learning environment Moodle and the OLPC-laptop, is planned for the end of 2010.

Furthermore, via the Fundashon Kòrsou Habri (Curacao Open Foundation), another attempt is being made to establish a more formal organization, aimed at the promotion of open source and open standards.

One can think of many reasons why it would be wise to have ‘open’ play an important role for Curacao, and its social, economic, and cultural development, however, the governor may have pointed out something that lies much deeper, and that stands quite apart from any interest whatsoever:

“One of the most beautiful expressions in Papiamentu is ‘di nada’ meaning ‘it’s nothing’ or ‘you’re welcome’. Let us work together to promote the spirit of cooperation and collectivity by helping each other, without merely thinking first ‘what’s in it for me?”